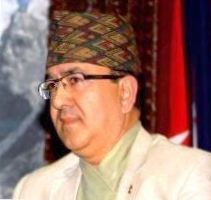 LLM (Master of Laws), The University of Brussels, Belgium, 1992.

Delivered a detailed presentation on the country profile on energy sector reforms and initiatives for the first time in the Board of Directors (South Asia), The World Bank, Washington D. C., as a Secretary to the Ministry of Energy, Government of Nepal after the return from the study tour at Itaipu Hydroelectric Project in Brazil, February, 2015

International Leadership Program on Water Resources Management for South Asia organized by US Department of State, Washington D.C May 19-06 June 2008

SOME OF THE NOTEWORTHY ACCOMPLISHMENTS

Secretary, the Commission for Investigation of Abuse of Authority (Sep, 2016 to Mar, 2017)

PAST EXPERIENCE AS AN INDEPENDENT EXERT

A Panel Member of the SAARC Arbitration Council (SARCO), one of the Specialized Bodies of South Asian Association for Regional Co-operation (SAARC), at Islamabad, Pakistan. This body is mandated to provide a legal framework/forum within the region for fair and efficient settlement of commercial disputes, as referred to it by the member states and their people.

SOME OF THE SPECIAL TASKS ASSIGNED/PERFORMED

Co-ordinator appointed for the improvement of Model Project Development Agreement to work with Herbert Smith LLP, an English Law Firm and the Expatriate Experts, Aug- February 2011.

Co-ordinator of the Negotiating team for the conclusion of Project Development Agreement with Independent Power Producers of Mega Hydropower Projects for Nepal, August 2010.

Leader of the Nepalese Team for various bilateral talks on Water and Energy related issues appointed by the Government of Nepal, 2006-2015.

Principal Drafter of the proposed Electricity Bill, 2065 and the proposed Bill for the establishment of Nepal Electricity Regulatory Commission, 2065 Ministry of Water Resources, March– May 2005-007.

Major Contributor for the finalization of the proposed National Water Plan, Water and Energy Commission Secretariat, January 2003- May 2005.

Appointed as Chief Arbitrator/ Co-arbitratorChief Arbitrator and Co-arbitrator appointed in various commercial disputes under domestic arbitration and under the UNCITRAL Rules. The most recent one under arbitration proceeding is: IRCON international vs. Department of Road and Gorkha-CWC-MK JV vs. Department of Road, Government of Nepal. Both the cases of arbitration are under UNCITRAL Rules. The Awards were already delivered on 2014.

SOME OF THE PUBLICATIONS

A Working Paper entitled General Framework of Agreement for the Development of Transboundary Waters presented in a workshop seminar conducted and organized by BP Koirala Foundation and IIDS, Kathmandu, February 2001.

Principal Author of a Position Paper on the Rights, Duties and Obligations of Upper and Lower Riparian Countries for Sharing Water Resources, Water and Energy Commission Secretariat, June-July 1998.